The Dachshund is a dynamic and affectionate breed. They are bold, proud and can be quite tenacious at times. They enjoy the outdoors and love to dig. They like to bark and are mischievous little dogs.

Dachshunds are an extremely devoted breed and make wonderful family pets. Their small size makes them ideal for apartment living, and they are relatively easy to care for. A Dachshund is a loyal companion who will love spending time with you.

Before you make the decision of owning a Dachshund it is your responsibility to learn about the good and bad associated with the dog. While you will discover Dachshunds are a wonderful breed, they may not be a suitable choice fro you.

The Dachshund is a breed that dates back 600 years. Historical artwork depicts small, long bodied dogs hunting badgers in Germany during the 15 th century. At this time, the dogs were used for hunting, and were prized for their hound-tracking ability, their size, and their temperament that closely matched terriers. All of these characteristics made it possible for the Dachshund to effectively track badgers and other small creatures that dwelled in holes.

The German name Dachshund actually means “badger dog” (Dachs – Badger & Hund – Dog), and was applied to the breed in the early 17 th century.

Originally, Dachshunds were bred with two types of coats: long hair and short hair. The third coat variety of Dachshund – wire hair – wasn’t introduced until the late 1800’s. As Dachshunds were being developed, two sizes were being bred in order to accommodate the hunters needs, based on what type of game was to be hunted. The larger sized Dachshund weighed between 30 and 35 pounds and was used to hunt larger animals such as wild boars and badgers. The smaller types weighed between 16 and 22 pounds, and were used to hunt hares and foxes. Today there are still two different sizes of Dachshund – Standard and Miniature.

As time passed, Dachshunds were used less for hunting purposes and more as family pets. The Dachshund was introduced to America in the 19 th century, and the standard smooth haired variety continues to be one of the more popular beloved dog breeds today.

Although they are friendly, devoted, and lovable, Dachshunds can be rather hard headed at times, especially when it comes to training. These dogs do best in obedience school, and require proper obedience training and socialization in order to develop as a credit to their breed.

Dachshunds are apart of the Hound dog group and are natural hunters. They will easily slip into their hunting role when the opportunity presents itself. Their natural instinct to hunt and track game is not something that can be trained out of them. Therefore, when taking them out for a walk, it is a good idea to always keep the Dachshund on a leash to ensure that he doesn’t chase after a squirrel or other rodents.

Dachshunds are extremely sociable dogs and love people, especially their owners. That being said, this breed has been known to be a little standoffish towards strangers, and is not recommended for families that have young children, as they won’t hesitate to snap at a teasing child, or a toddler who doesn’t understand how to play with the dog.

As for other pets, the Dachshund is pretty good. However, you need to watch this breed as they can be jealous or aggressive with other pets, especially other canines. Dachshunds are not good with rodents. Remember, this dog was bred to hunt game, and you can not train this instinct out of him. Note: The longer haired type of Dachshund is considered to be the most docile of all the coat varieties.

The Dachshund loves to bark, which makes him a good watchdog, as he will alert his owners when strangers are at the door.

As far as grooming is concerned, the Dachshund is relatively easy to take care of. The short haired types simply need to be groomed once a week, or biweekly with a rubber brush. This will remove any dead hairs, and keep their coat looking glossy. Long haired Dachshunds should be groomed daily to keep tangles and mats out of the hair.

Because Dachshunds are small, compact dogs, they can live virtually anywhere. This makes them ideal for both city and country life. They are perfect for apartments, and happily make their home wherever their owner chooses to live. However, even though they do well in apartments and small spaces, the Dachshund still requires plenty of exercise. He should be taken out at least twice a day for a good 10-20 minute walk, on top of the additional playtime or exercise he receives indoors. Keep in mind that the Dachshund is a breed that is prone to obesity, so it doesn’t take much for the dog to become overweight.

Other health issues that are common in this breed include hip dysplasia, spinal problems and overall bone development issues. A Dachshund should be tested and monitored for these health defects.

In essence, the Dachshund makes a wonderful companion for both the experienced and first time dog owner. With the right care and commitment he will bring plenty of joy and adventure to your life. 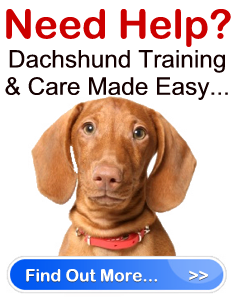